On September 14, 2012, by the Order of NEFU Rector E.I. Mikhailova, the Mammoth Museum Laboratory was named after its founder, Candidate of Biological Sciences, the winner of Prize of the Republic of Sakha (Yakutia) in the field of Science and Technology, Honored Scientist of the Republic of Sakha (Yakutia), Honored Veteran of the SB of RAS, Lazarev Petr Alekseyevich

On September 14, 2012, by the Order of NEFU Rector E.I. Mikhailova, the Mammoth Museum Laboratory was named after its founder, Candidate of Biological Sciences, the winner of Prize of the Republic of Sakha (Yakutia) in the field of Science and Technology, Honored Scientist of the Republic of Sakha (Yakutia), Honored Veteran of the SB of RAS, Lazarev Petr Alekseyevich .

P.A. Lazarev Mammoth Museum Laboratory is a specialized scientific and cultural institution, which conducts the study of mammoth, mammoth fauna, its natural environment in the ice age and spreads the scientific knowledge among people.

The word "World" in the original name of the Museum is not used accidentally, since unique paleontological materials of universal significance, kept and shown there, are considered an invaluable heritage of mankind.  75% of the world's known mammoth graves and other representatives of the mammoth fauna with preserved soft tissues were found in Yakutia.

It is also important that leading world experts took part in the study of found unique animal fossils. Research in the laboratory freezer.

Since 2007, the museum staff began to make the collection of the Institute of Applied Ecology of the North (all paleontological materials, collected as part of the Academy of Sciences of the Republic Sakha (Yakutia), has been transferred to the Ministry of Property Relations of the Republic of Sakha (Yakutia). The large collection of fossil remains of the mammoth fauna animals of almost all the representatives of the mammoth fauna of the North-Eastern Siberia and unique mammal fossils with soft tissues was gathered in a short time. Now there are 1450 objects in an osteological collection of the Mammoth Museum. Among the objects with soft tissues there are such unique findings of recent years as incomplete carcass of Verkhoyansk horse (2009, the absolute age is dated to 4450 years), the whole mummy of bison calf from the vicinity of the village of Batagai (2009, 8200 years), the carcass of the elk calf from Buor Khaya Peninsula (2010, 9000 years), the mummy of predator from Ust-Yana region (2011, 12 450 years), the head of a fox with a fully-preserved skin and other soft tissues from Abyisky district (2012). There are no analogues of these findings in the world except the Holocene horse. That’s why they are important for science and museums. All exhibits with soft tissues are kept in a frozen state in a large laboratory freezer for long-term storage at optimum temperature (-18 ° C). This is very important because it gives scientists the opportunity to study tissues and cells that had lain in the earth for thousands of years with minimal changes. Now the Museum has 4 full-time employees, including one senior researcher, candidate of Biological Sciences, research scientist, junior researcher and the head of exhibition department. The research supervisor of the laboratory is the Director of the Zoological Museum of RAS, the Deputy Director of the Zoological Institute of RAS, Scientific Secretary of the Mammoth Committee of RAS, the President of the International Mammoth Committee, paleontology expert at the Ministry of Culture of the Russian Federation, Candidate of Biological Sciences, Tikhonov Aleksey Nikolaevich, who is also the leading researcher in the Laboratory of the Mammoth Museum. 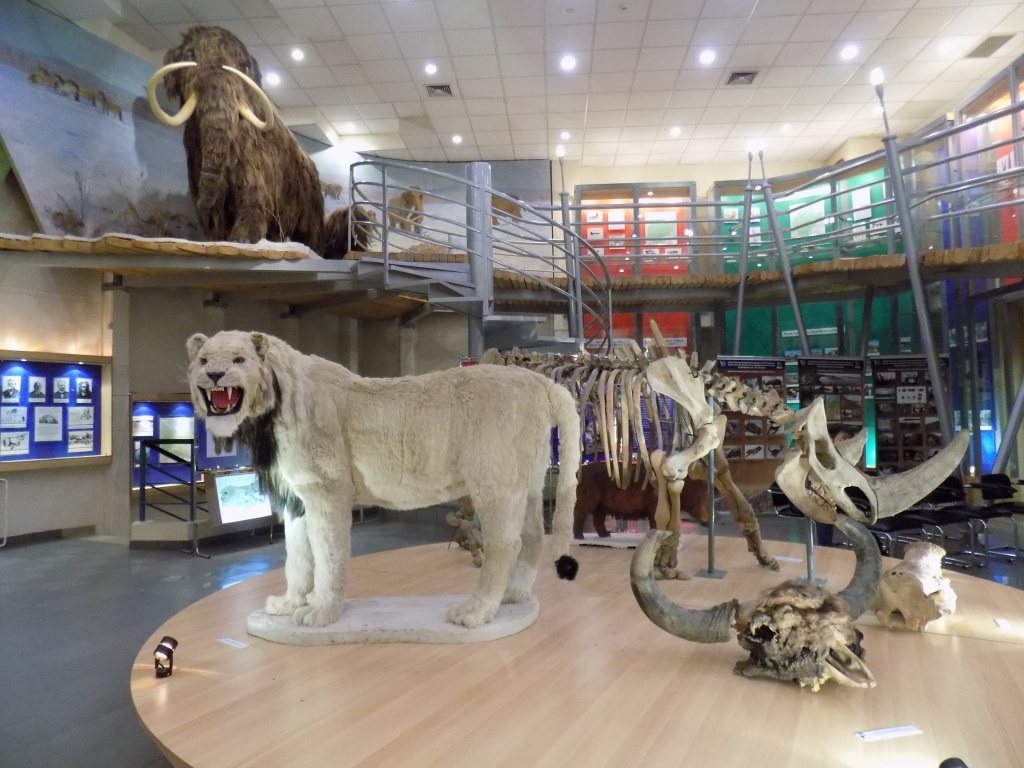 The Museum is engaged in research work. It also conducts research projects on unique findings, organizes the field work at the sites of the mammoth fauna. For the past twenty years, the museum staff have excavated and studied almost all the important findings of the mammoth fauna animals found in Yakutia: Maksunuohsky mammoth, Yukagirsky mammoth, Oimyakonsky and Hromskoy mammoth calves, Kolyma woolly rhinoceros and others.

In 2012, NEFU Research Institute of the Applied Ecology of the North organized an international expedition “Yana 2012”. The expedition members found the following interesting paleontological artifacts: the ancient gopher cache, the mummy of the arctic lemming, mammoth dung and bone remains of the majority of representatives of the mammoth fauna, who lived in the early, middle and late Pleistocene in the North of Yakutia. Also at the sites of Batagayka and Muus-Khaya the femur and humerus mammoth bones with soft tissues and the preserved bone marrow were found. The samples of bone marrow with other mammoth bioassays were transported to Seoul. Now they are being studied as part of the joint project “Mammoth Rebirth” between NEFU and the South Korean Sooam Biotech Research Foundation.

In recent years, M.K. Ammosov NEFU has established cooperation with the University of Michigan (USA) in the field of paleontology.

The second major focus of the Mammoth Museum is an exhibition activity. Over the years, mammoth exhibitions were organized in France, Germany and Japan. Currently, an exhibition “Hello Mammoth”, organized by the Research Institute of the Applied Ecology of the North and “SakhaEKSPOmamont”, is being held in the Republic of Korea.

Preparation for the exhibition in Seoul