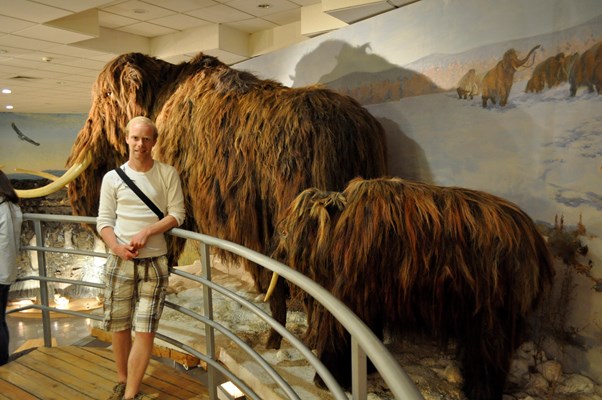 Mike at the museum in Yakutia

I could tell much more about the whole trip, but I suggest all of you to just go and see for yourself. It is really a flabbergasting experience, a trip you will remember your whole life and tell about it to your grandchildren when you are old.

My name is Mike, I’m 20 years old and I study Computer Science at UiT The Arctic University of Norway. Last summer I was lucky to have to opportunity to attend the summer school at NEFU in Yakutsk, in the middle of Siberia in Russia. The summer school had its focus on Sakha/Yakutia: Living Culture in Permafrost area. The Yakutia region is mainly known for its extremely low temperatures in winter; the average temperature in January in Yakutsk is as low as -40.9 degrees Celsius!

Late 2012 I was contacted by the contact person at NEFU, suggesting travel to the far east to experience something truly different. I had never been in Asia before, so it would be a totally new experience, and it would be a safe and an excellent idea to attend a summer school as my first touch with Asia. I did not have to think a long time before I decided to obtain more information about the summer school in Yakutsk, and not a long time after, I decided to go.

And time flew. Many of my fellow students in the summer school met at the airport in Moscow before taking the flight to the east. I was extra fortunate, because I was sitting next to the window, so I could look through the window and dream about what would be happening during the next three weeks. And of course, I dreamed. I woke up at the time the airplane was descending, and the first thing I saw when we got under the height of the clouds was an over-sized river. Must be the Lena. WOW! And the landscape was so extremely bright green. When we finally landed after a flight of six hours, most of us were excited, sleepy, and a little bit nervous too. What was going to happen?

Our schedule for three weeks was incredibly tight. Usually, we had Russian language lectures in the morning until lunch, then we really had the best lunches of the world, and in the afternoon we attended lectures about geography, food, history and so forth, often accompanied by a visit to the museum. Also, we did a three-day long field trip to Amga, a local rural village, a couple of hours’ drive to the east from Yakutsk. In my opinion, the three days in that village were the best of the entire trip. We had lectures outside in the nature about the shaman religion, flora and fauna, and music. It was really different from what I am used to – old fashioned wooden toilets... outside (try to imagine that the people there in winter – at -50 degrees Celsius have to go to the toilet in such extreme conditions)… roads of sand, wild horses, the Amga river where we could swim (yes, we have rivers in Norway, but they are really cold). Also, we went to the Lena Pillars by boat on the Lena river. It's a beautiful formation of rocks next to the river. On the boat, we had a geology lecture, and we had lots of fun with the locals on the boat. Singing, dancing, taking pictures together, it was truly a once-in-a-lifetime experience!

I could tell much more about the whole trip, but I suggest all of you to just go and see for yourself. It is really a flabbergasting experience, a trip you will remember your whole life and tell about it to your grandchildren when you are old. Such times will never disappear! Good times... in Siberia.