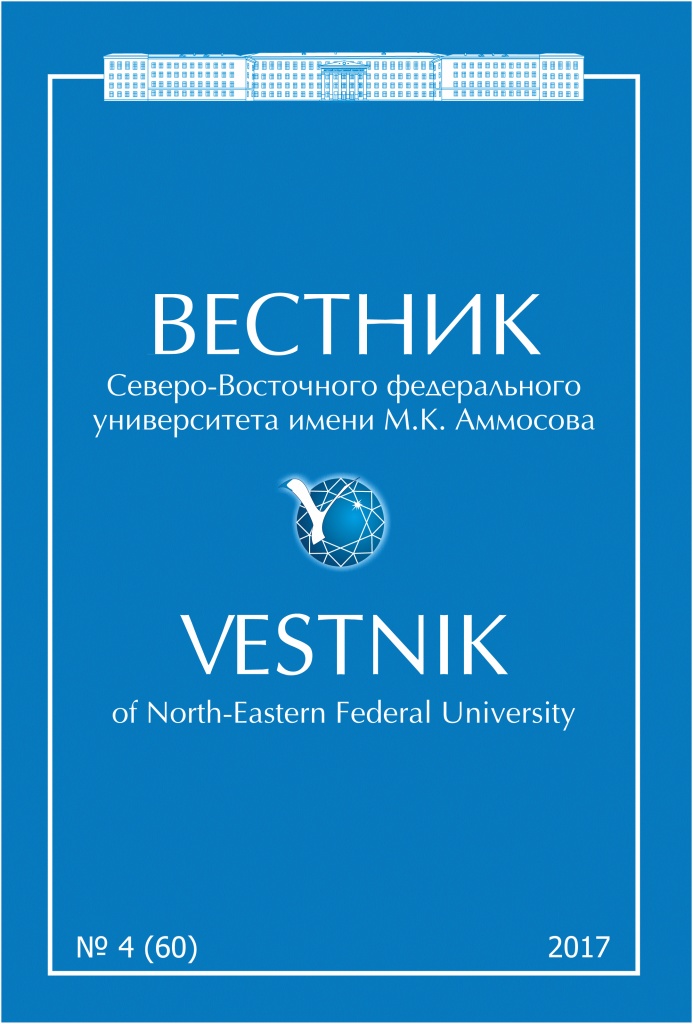 Subscription index of the catalogue “Rospechat” 47182

Short title of the Jounal:Vestnik of NEFU

The target audience of the journal are academic researchers, college and university professors, post-graduate and masters’ students.

The editorial policy of the journal is aimed at:

- assistance to the scientific publication in the creation of a competitive scientific and educational environment that activates the innovative and creative work of representatives of the scientific communities on regional, national and global level.

- the transformation of the scientific journal into a reliable tool of scientific communication, a resource that gives impetus to the development of the federal university;

- integration of the scientific journal into the world scientific information space.

Purpose and objectives of the journal

The aim of the scientific journal is to highlight the results of scientific research of teachers, employees, doctoral students, post-graduate students, undergraduates and applicants for doctoral and Ph.D. degrees in Russian and foreign scientists in the fields of biological sciences, computer science, computer science and management, chemical technology, philology.
Tasks:
-  publication of original scientific works containing new research results conducted in universities and scientific centers of the country, the country, the world;
- ensuring the high quality of articles contributing to the development of research and educational activities of representatives of university, academic and sectoral science;
-  the disclosure of directions, scope, nature, specificity of scientific research work of the NEFU for integration into the international scientific community;
-  reaching the level of a highly rated academic journal that meets international standards and standards.

"Vestnik of North-Eastern Federal University” was included by VAK Presidium (Higher Attestation Commission) under the Ministry of Education and Science of the Russian Federation into a new “catalogue of peer-reviewed scientific publications, which have to include the main scientific results of dissertations for doctor’s and candidate’s degree” in three scientific fields and five specialties:

The periodical “Vestnik of North-Eastern Federal University” is on free access in CyberLeninka, Ebsco.

“Vestnik of North-Eastern Federal University” is registered as a periodical in  the Federal Service for Supervision in the Sphere of Telecom, Information Technologies and Mass Communications (ROSKOMNADZOR) (Certificate №FS 15-0541 from 04.07.2007, Registration certificate PP № FS77-43460 from December 30, 2010 year, PP № FS77-67401 from October 13,2016 )