The main idea of the project is to integrate the efforts and capabilities of all Arctic countries to preserve and revive the languages and cultures of their indigenous peoples based on a single multilingual Internet portal. 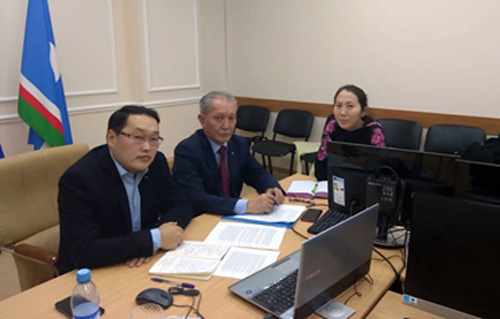 —    Study best practices for preservation of linguistic and cultural heritage;

—    Create a digital platform on indigenous languages and cultural heritage;

—    Involve indigenous youth in their own communities.

Project was started in 2011. At the first stage (2011-2013), expeditions were held to the places of compact residence of the indigenous peoples of the Republic of Sakha (Yakutia) for organizing video and photo recording of disappearing native speakers and culture bearers of the indigenous peoples (Yukagir, Dolgan, Even, Evenki, and Chukchi people). The work in this area has shown a great demand for the project not only in the Republic of Sakha (Yakutia), but also in other regions of Russia, where representatives of indigenous peoples live. In 2013, the project was presented at the VIIth Congress of Indigenous Peoples of the North, Siberia and the Far East in Salekhard. It aroused great interest and support.

In April 2013, Arctic indigenous peoples’ multilingual portal www.arctic-megapedia.ru became a finalist of the Far Eastern Internet Award “Sterkh” in the section of “The best non-commercial or thematic project of the Far East”.

The second stage of the project (since 2014) was its’ expansion over the entire Far East. Expeditions were organized in Chukotka (Chukchi, Eskimos), Kamchatka (Koryak and Itelmen), and Khabarovsk Region (Nanai, Negidal and Udegei People). Today, the project claims to be a project of the Arctic Council. The desire for joint implementation was expressed by Norway (University of Tromsø), Finland (Arctic Centre of the University of Lapland), Iceland (Arctic Portal), USA (Arctic Center, International Arctic Social Sciences Association). The Russian Association of Indigenous Peoples of the North will be the co-leader of the project. The upd ate of the project was presented at the online plenary meeting of the Arctic Council Sustainable Working Development Group on June 9. Feedback fr om SDWG members has been received and taken into consideration in this version of the proposal.

New thematic network “Human Adaptation in the Changing Arctic” was established in 2019. 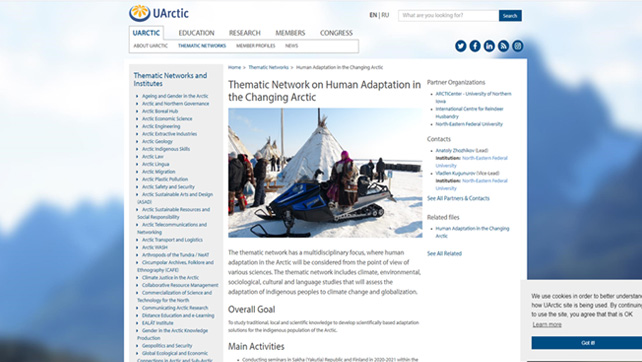 This thematic network (TN) has a multidisciplinary focus wh ere human adaptation in the Arctic will be considered from the point of view of various sciences. This TN includes climate, environmental, sociological, cultural and language studies that will assess the adaptation of indigenous peoples to the climate change and globalization.

Main goal of the thematic network is to study traditional, local and scientific knowledge to develop scientifically based adaptation solutions for the indigenous population of the Arctic.

This is a joint international project between Norway, Finland and Russia. The UNESCO Chair in a partnership with the Institute of Circumpolar Reindeer Husbandry received a grant from the Nordic-Russian Cooperation Program in Higher Education and Research and began work on the project “Feasibility study on co-production of knowledge between researchers and indigenous communities for climate change adaptation”. Within the framework of this project 2020-2021, it is planned to conduct two seminars with the participation of indigenous communities, authorities and researchers in Kolymskoe village of Nizhnekolymsky district of the Republic of Sakha (Yakutia) as well as in the village of Hetta, Finland.

In 2019, a cooperation agreement was signed between NEFU and the Federal University of Santa Catarina (Brazil). Since then both universities have been worked together. Gilvan Müller de Oliveira, a professor at the Federal University of Santa Catarina and a Chairholder of the UNESCO Chair “Strategies and Policies for the Preservation and Development of Linguistic Diversity”, specializes in multilingualism and linguistic diversity. 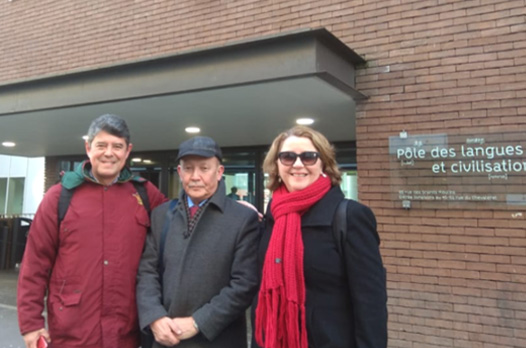 Our Chair is a partner of the UArctic project “Arctic Indigenous languages and revitalization: an online educational resource” of UiT the Arctic University of Norway. Also Institute of the Peoples of the North at Herzen State Pedagogical University of Russia, Nord University (Norway) and Arctic Council Indigenous Peoples’ Secretariat will be working on this project.

The purpose of the project is to finalize a peer-reviewed comprehensive circumpolar GIS map of Arctic Indigenous languages to be used as an online resource for education and research. The main result of this project – GIS map – will be hosted by our University. 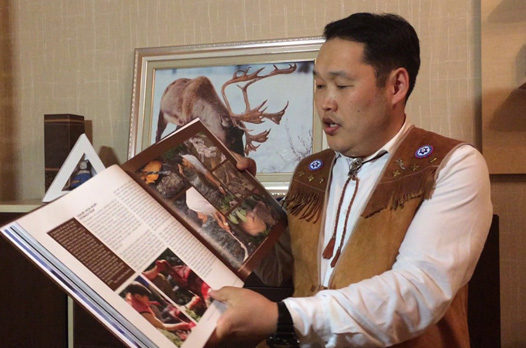 Our Chair is a partner of this UArctic project of the Nord University Business School. The project is part of the Arctic Council EALLU Arctic Change, Indigenous Youth and Food Culture project. “Indigenous Food Innovation Enhanced” project links to the Arctic Council Arctic Food Innovation Cluster (AFIC) project. In February 2019, the Arctic Council – SDWG endorsed the Arctic Food Innovation Cluster (AFIC). The intent of the AFIC is to respond to global challenges of food production while seeking to define the Arctic’s role and contribution to the changing climate and issues of food security locally and around the world. The AFIC pull together relevant people in the Arctic foods value chain for a cluster-based approach to food production and regional economic development. This project contributes toward the AFIC project by educating future entrepreneurs, potential active members of the AFIC initiative.  Текст....

ABOUT US UNESCO Patronage Our projects Contacts